Initiated 10 years ago by the Cologne based media artist Wilfried Agricola de Cologne, the project of the global network, entitled: [NewMediaArtProjectNetwork]:||cologne – developed from a small Internet based art piece to a global wide acting context of digital art creation – spread on a variety of project platforms dedicated to different types of contents and art media., just to mention some–> 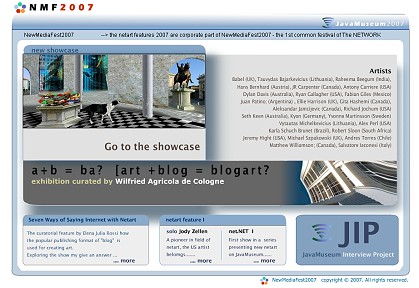 NewMediaFest’2010
takes the chance of the 10th anniversary to initiate during one year new projects and cooperations on all network platforms, as well as spotlighting the most important projects realised during 10 years in an exchange between virtual and physical space, including more than 2000 artists, curators, organisations and institutions, the pioneering decade of new forms of contemporary art.
Many of the projects to be spotlighted received prizes ansd awards and were presented on the most relevant festival and exhibition contexts worldwide.
As a media art project itself, the global network started already years before Web2.0 was invented, still successfully running social online contexts which were, differently than Facebook & Co open not only to networking creators, but also available to the entire online audience without any restrictions. The global network incorporates a variety of diffferent types of art media, related projects and platforms, whereby Wilfried Agricola de Cologne is acting in different identities as an initiator, festival director, curator, programmer, multi-media developer, artist, and many more.

NewMediaFest’2010
is organised as a networked festival context, which is coordinated online in form of a blog journal, displaying and announcing daily new program features online and physical events. However, the festival is not completely scheduled in all details, yet, until its end on 31 December 2010, so there is sufficient time and space for experimenting, new and additional initiatives, virtual and physical projects and collaborations during the coming year.

During the first month – January 2010 – following features are expected to be launched
–>
1. CologneOFF V – Features for One Day on VAD – Video Art Database
2. VideoChannel – French Video Art
3. JavaMuseum – start of the netart features of JavaMuseum Journal – Celebrate!
4. Cinematheque – launch of Flash & Thunder – Flash as a tool and Medium for artistic creations
5 On 27 January 2010 – 65th Return of the Liberation of the Concentration Camp of Auschwitz –
A Virtual Memorial Foundation & VideoChannel will launch
SFC – Shoah Film Collection and related program components